Things I wish I had known 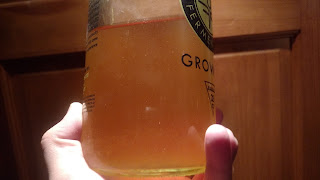 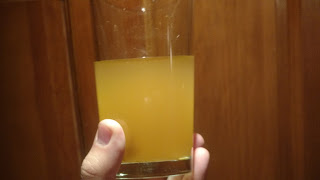 Which one's the black tea?

If you guessed the bottom one, congratulations.  It's a first flush Darjeeling (an Indian black tea) using a half once per gallon ratio.  For reference, the top is a white tea champagne flavored blend using the same ratio.

A year ago this would have been surprising to me.  My knowledge of tea was mostly informed by the cheap boxes at target, the ones that contain a hundred bags per 2 dollar box or some such and taste like burnt umber.  The idea that there is so much variety between each type of leaf, each nation's (and even farm's) oxidation and roasting process, was pretty much foreign.

Getting into brewing kombucha has awakened my curiosity about the tea that goes into it.  I still know very little about it, mostly what I've learned through conversations with people who do know about it and experimentation on my own, but I would like to pass along some of the myths I've heard about kombucha and some of the knowledge I've gained.

This one is completely false.  A good starter can be made from any type of tea, I actually keep one black tea hotel and one oolong that I use to start lighter or sweeter teas.  Both formed enormous mats over the top, both ferment over similar time frames and maintain similar strength and pH. I also make flower teas, like the blue butterfly (from Short and Stout Tea) that I posted a couple weeks ago.  While caffeine can contribute to the strength of a brew, the blue butterfly has made it through 5 or 6 generations and still produces consistently, though the actual chemical makeup of the SCOBY may have changed.

Myth 2. Metal is toxic to kombucha

Another one that's completely false, though based in a modicum of truth.  Kombucha has a very low pH and when kept in a copper, aluminum, or cast iron container can leach toxins from the metal over the course of days.  This is also true for certain glazes and treatments in cheap glass, ceramic, or plastic containers.  The best containers to keep kombucha in are stainless steel, untreated glass, or open top wood casks.

The most damage done by this myth is during stirring, because a lot of people are led to believe they can't use metal spoons and use plastic or wood exclusively.  Generally this is fine, but plastic and wood tend to hold greater concentrations of bacteria than metal and are harder to sanitize due to their porous nature.  Generally this won't be an issue but if the pH of your starter is high or the balance is off, mold can overtake your brew before the SCOBY gets to work.  If the strength of your starter is suspect then you should exclusively use sanitized stainless steel and glass.

Usually referred to as F2 or (as I prefer) bottle fermentation, this is typically the step when fruits, herbs, and other flavors are added.  The idea that this is absolutely necessary is false, though depending on what you want to do there are good reasons to do a second ferment.  If you're trying to create a fruit flavored drink then it's almost always better to add after fermentation, because fruits and herbs can carry foreign bacteria that can cause mold or unexpected flavors (the lower pH and stronger culture of a completed ferment will kill those bacteria off).  It's fun to experiment with flavored first ferments but experiments should be done in an extra vessel with plenty of backup starter in case something goes wrong.

The most important thing that happens in a second ferment is that the bacteria in the SCOBY are put in stasis due to the lack of oxygen, while the yeast continue to consume sugars and convert them to alcohol and carbon dioxide.  During the first ferment the bacteria convert the alcohol into acid while the CO2 escape into the atmosphere.  If you like a fizzy drink, then after bottling leave the product out at room temperature for at least a week then let it bottle condition in the fridge another week or two.  However, certain kombuchas may not need a lot of fizz (I find jasmine green blends, for example, get enough carbonation in the first ferment and can go right in the fridge).  Carbonation is valuable in cutting over-acidic drinks, but can also rob sweetness and subtlety from the finished product.  It's a balancing act that depends entirely on what you want to create and ultimately you will develop your own base of knowledge and experience around this process.

Myth 4a.  Kombucha is good for every malady, is completely safe for everyone in any quantity, and contains no sugar/high levels of vitamin B.
Myth 4b.  Kombucha is dangerous and has no redeeming qualities.

Kombucha has some unfortunate overenthusiastic supporters and detractors.  GTS has actually gotten in trouble for underestimating the total sugars and labeling high levels of vitamin B in their drinks, which can be downright dangerous for a diabetic drinking their product who has to carefully count every carb.  Unfortunately, label laws in the US operate mostly on the honor system in terms of nutrient and calorie counts, and this has allowed dishonest companies to profit from some of the misinformation about kombucha (and other foods/drinks).

Kombucha contains alcohol.  It's usually low, though home brewed kombucha generally is higher than the .5% abv that allows store bought brands to be sold as non-alcoholic.  I've actually had someone argue that the vinegar in kombucha (there is no vinegar in kombucha, vinegar is a completely different process) cancels out the alcohol.  This has no basis in chemistry, science, or reality except in the kind that he wishes was true.  The saddest part is that this was a thread about how safe it is to give endless amounts of kombucha to children.  My day job is working as an Occupational Therapy Assistant with children and adults with disabilities, a depressing number of whom were exposed to alcohol and drugs as a fetus or small child.  Alcohol is not safe for a developing brain, small amounts are probably ok and it's definitely preferable for a child to drink small amounts of kombucha to large amounts of corn syrup in juices or soda, but it needs to be carefully rationed to avoid even subtle damage (especially with kids in the 1-6 age range).  Just be careful and talk to a pediatrician, please.

The probiotics in kombucha are present but in most people won't make a meaningful difference to their stomach flora.  There are a couple million bacteria in a typical 8 ounce serving of kombucha, while there are trillions of bacteria hanging out in your stomach at any given time.  There are about 3 times the number of bacteria cells in your stomach than in your entire body combined.  There's a reason probiotic capsules have to mark that none of their claims have been evaluated by the FDA, and kombucha generally contains even fewer (though with slightly greater diversity).  The good part of this news is that the candida in kombucha (a yeast strain generally implicated in yeast infections) is small enough that it almost never causes overgrowth.

On the other hand, kombucha is a low sugar, no artificial sweetener fizzy flavored drink.  It scratches the same itch that beer and soda creates and can be a good replacement for either/both of those.  Diet sodas and artificial sweeteners have been linked to higher incidents of strokes, heart disease, and (most surprising) weight gain.  Kombucha is a way to get that sweetness, fizziness, or even buzz - if you create a wine, beer, or mead with the product - without having the calories or dangers of artificial sweeteners.  It's also a great creative outlet and the fast turnaround between brewing and drinking means mistakes aren't disastrous and are easy to learn from and correct.


This post is getting a bit long in the tooth so I'll close it here.  If you have any questions or thoughts on this then I'd invite you to engage on Facebook or Instagram.  Disagreement and feedback is always welcome as are recipe swaps and brewing discussion.
Posted by JM at 7:51 PM No comments:
Email ThisBlogThis!Share to TwitterShare to FacebookShare to Pinterest
Older Posts Home
Subscribe to: Posts (Atom)